A responsibility for past, present, and future:  Soka Gakkai UK and Taplow Court.

Posted on August 20, 2014 by buildingbuddhism

Our latest fieldwork research saw us hot-footing it from Leeds to Buckinghamshire to visit the amazing Taplow Court.  Taplow Court is now the UK head-quarters of Soka Gakkai International (SGI), a lay Buddhist movement who follow the teachings of Nichiren (a 13th Century Japanese Buddhist practitioner and scholar), which like many of the other Buddhist groups in this study has a number of operations in different locations all over the world. According to Robert Bluck in his book British Buddhism (2006: 16), Soka Gakkai are one of the three most sizeable Buddhist groups currently operating in Britain, with, we were told, over 13,000 followers.

Soka Gakkai describe themselves as a socially engaged Buddhist movement, and, according to their website, it’s followers  ‘aim to create value in any circumstances and contribute to the well-being of others’. More information about Soka Gakkai, their aims, work and practices, can be found on their website.

Soka Gakkai has been operational in the UK since the 1960s and prior to purchasing Taplow Court, they originally occupied a shop-front and rooms above it in Richmond, Surrey.  As their membership grew, they realised they needed more space, and in 1985, purchased a former convent building Blackheath. Whilst work was underway to convert the building, disaster struck and it burnt down. Consequently, after some tough decisions, the group were forced to continue their search for suitable premises.

Two years later, in 1987, Soka Gakkai found and purchased Taplow Court, a Listed stately home and manor house, once owned by Lord Desbourough and the Grenfell Family, and latterly occupied by a telecommunications company. Whilst many of the buildings we have seen to date have their roots in the industrial Victorian era, the history of Taplow Court and its land has a connection to British history that begins far, far earlier. Whilst a full and detailed history is available in the Taplow Court Visitor’s Guide Book and on SGI UK’s website, in brief, Taplow Court and the land that is on has been home to many things over the centuries, including a Bronze age settlement, a Roman fort, a site for Christian conversion and baptism, a medieval Church, a priory, a manor house, and a girl’s school during the Second World War. Indeed, although the Tudor manor house was destroyed by fire in  1617, it was reconstructed some fifteen years later, and in the 1700’s became home to the Earls of Orkney. Over the next hundred and fifty years, Taplow Court was subject to renovations and building projects (particularly in the 19th Century), and at the turn of the Twentieth Century, whilst the house was owned by the Grenfell family, extravagant parties were held which apparently also attracted Royalty.

Photograph of Edward VII on a visit to Taplow Court

As you approach Taplow, and wander around it’s grounds, you can’t help but think of all that has gone on  and the stories that the house and surrounding lands might tell.  You can still clearly see an Anglo-Saxon burial mound for a renowned Chieftain in the grounds (called Tappa’s Mound) and there have been numerous artefacts found by archaeologists on the site. 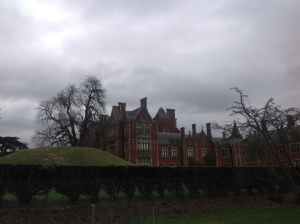 When Soka Gakkai purchased Taplow, it was not as derelict as some of the other buildings we have seen over the course of our research. However, it still needed work, and this refurbishment took two years.  However, the team involved in the purchase were clear that although they needed a building that would suit their purposes as a Buddhist organisation, they also very much wanted to maintain and uphold the history of the building and land, and this is certainly very evident.  From the sympathetic decoration, to the numerous displays of historic photographs and artefacts and the well-manicured grounds, when you go to Taplow Court, it is impossible to forget the English history that it is rooted within.  This is particularly evident as we experience the First World War Centenary.  Taplow Court was not immune to war-time tragedy, and indeed, whilst the eldest daughter of Lord Desborough was stationed as an army nurse, her two elder brothers were both killed in Flanders in 1915.  A haunting painting hangs in a large room in Taplow, showing a line of young men, half-finished, representing those who had their lives tragically cut short on the battlefields of Europe. In fact, SGI are planning a series of events, including outreach work with local schools, to mark the Centenary year and to really allow visitors to interact with this period of history, but also to encourage dialogue about peace and respect for life, an important philosophical underpinning for SGI.   In fact, those we interviewed drew heavily on the history of the site, and stated that it caused them to look both to the past and to the future ‘with a sense of responsibility to make a positive difference to the environment that we are in’.

Whilst the house certainly continues to look at home in the English countryside, more recently, Soka Gakkai have added a more modern building in the grounds to serve as their principal community meeting space.  Although this building, the Ikeda New Century Hall, is apparently rather unique for a Soka Gakkai building, there are similarities with other SGI buildings across the world, including shared clean, modern lines, and minimal decoration. In fact, there are no Buddha images or pictures in the main hall, but instead a shrine which houses the gohonzon, a scroll with sacred chants and names written on it, originally put together by Nichiren.  In addition, what were once the sticke tennis courts for the manor house are now a cafeteria which is used by those working in Taplow Court, as well as visitors. 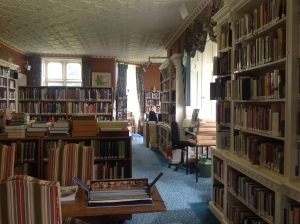 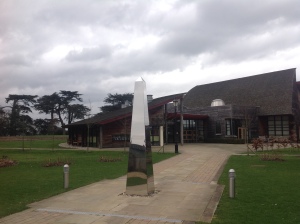 The current purpose of Taplow Court is the house the administrative HQ of SGI UK and play host to courses for members or large meetings.  Different members might use the buildings, or occasionally choirs or local charities.   As Taplow is part of the Historic Houses Association, it is also regularly open to visitors.  And like so many other buildings that we have seen on this project, it is a huge financial commitment to keep the fabric of the house and gardens well-maintained. Yet, to SGI UK, the value of spending so much time and effort is that the building itself is a vehicle to bring communities and individuals together, in order to help people.

As an aside, whilst we were at Taplow, we discussed how the built landscape of Buddhism has changed over the past fifty years.  Whilst it was felt that Buddhists in Britain have always been attracted to interesting buildings, and ones with history and character, in recent years, the quality of the renovations and restoration work has significantly increased.  This might well be a reflection of health and safety criteria becoming more stringent, and the need for communities to employ professionals as opposed to volunteers to complete renovations.Or is it because it is important to attract people with decent facilities?  Or because maintaining the buildings to a high standard reflects the value that is placed on Buddhist practice in all it’s forms? Something to reflect on as we continue with the research.

This entry was posted in Uncategorized. Bookmark the permalink.